Thunderstorms produce strong electric fields over regions on the order of kilometer. The corresponding electric potential differences are on the order of 100 MV. Secondary cosmic rays reaching these regions may be significantly accelerated and even amplified in relativistic runaway avalanche processes. These phenomena lead to enhancements of the high-energy background radiation observed by detectors on the ground and on board aircraft. Moreover, intense submillisecond gamma-ray bursts named terrestrial gamma-ray flashes (TGFs) produced in thunderstorms are detected from low Earth orbit satellites. When passing through the atmosphere, these gamma-rays are recognized to produce secondary relativistic electrons and positrons rapidly trapped in the geomagnetic field and injected into the near-Earth space environment. In the present work, we attempt to give an overview of the current state of research on high-energy phenomena associated with thunderstorms. 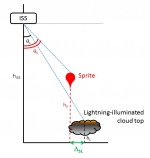 The energy spectrum of X-rays from rocket-triggered lightning

Although the production of X-rays from natural and rocket-triggered lightning leaders have been studied in detail over the last 10 years, the energy spectrum of the X-rays has never been well measured because the X-rays are emitted in very short but intense bursts that result in pulse pileup in the detectors. The energy spectrum is important because it provides information about the source mechanism for producing the energetic runaway electrons and about the electric fields that they traverse. We have recently developed and operated the first spectrometer for the energetic radiation from lightning. The instrument is part of the Atmospheric Radiation Imagery and Spectroscopy (ARIS) project and will be referred to as ARIS-S (ARIS Spectrometer). It consists of seven

NaI(Tl)/photomultiplier tube scintillation detectors with different thicknesses of attenuators, ranging from no attenuator to more than

thick aluminum box). Using X-ray pulses preceding 48 return strokes in 8 rocket-triggered lightnings, we found that the spectrum of X-rays from leaders is too soft to be consistent with Relativistic Runaway Electron Avalanche. It has a power law dependence on the energies of the photons, and the power index, λ, is between 2.5 and 3.5. We present the details of the design of the instrument and the results of the analysis of the lightning data acquired during the summer of 2012. 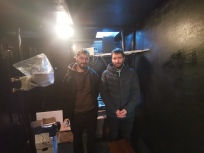